Do dads go to baby showers?

According to research, women face a lot of pressure to be involved parents compared to men. Pew Research found that approximately 77% of women say they feel the pressure compared to less than 50% of men. However, as society has evolved, these dynamics are changing as well.

Today, it seems that both parents-to-be are equally invested in their child’s upbringing. In fact, many couples choose not to host separate baby showers or just one for the mom-to-be, but rather combine them into one big celebration for both mom and dad. This means it’s more common and socially acceptable to have men go to baby showers these days.

Are baby showers only for ladies?

Traditionally, baby showers have been about getting the women that support the future mother together to celebrate her. It goes without saying that the ladies do deserve to be praised for their hard work, backaches, nausea, and everything that they’ve had to endure during the 9 months of pregnancy.

Often, the spouses and other men of the baby shower attendees would meet up together while the party was going on. This begs the question, why not just pull them in to have a bigger baby shower?

Either way, if you have decided on a gender-neutral baby shower, then there is no reason why you should exclude anyone just because they aren’t female. The important thing is to keep the focus on celebrating the new addition to the family. It doesn’t matter if you’ve decided to have men go to baby showers; all that matters is that you celebrate together!

Yes, men go to baby showers! According to research, fathers today play a bigger role in raising children than ever before. As such, they deserve equal recognition during pregnancy and after birth. So whether you decide to throw a traditional baby shower or go gender-neutral, remember to celebrate fatherhood too.

It doesn’t hurt to ask men if they want to go to baby showers. Some may be thrilled to be asked to attend a coed baby shower.

However, not every guy wants to go to baby showers since it’s something that has been traditionally female for so long. He may find himself being awkwardly excluded or feeling out of place at a baby shower, especially if there are no other guys around.

Why are guys not allowed at baby showers?

While women get special attention during pregnancy, men often receive less appreciation. According to Dr. Katz, who specializes in health promotion and prevention, believes that holding exclusive baby showers for just the mom-to-be makes little sense. Instead, he suggests having the dad-to-be attend along with inviting friends and relatives to join in the fun.

The reason why guys aren’t invited is that it was once thought that women were more emotional than men when it came to babies. This belief has since been disproved by science. In fact, studies show that both genders can be equally affected emotionally during the life-changing process of having children.

The only difference is that women tend to bond with their child in the womb while men aren’t involved until after the birth. Think about it – how do you not get emotionally attached while the baby grows inside mom’s belly for 9 months?

However, this doesn’t mean that all dads should automatically be included in every baby shower either, especially if they’re not a fan of the idea. Some guys may prefer not to go to baby showers and keep it more traditional.

What are the different types of baby showers?

If you’re struggling to figure out what kind of baby shower to throw, consider these options to see what makes the most sense for you.

This is the traditional baby shower focused on celebrating the new mom-to-be with her closest friends and family. These often involve fun pregnancy-themed games, presents, and deserts that center around life with the future baby.

This is like a bachelor party where you only invite men, but the men attending often bring a package of diapers and maybe some of the future dad’s favorite beverages. Unless he’s really into planning the baby shower, this is usually just a day to hang out with his guy friends and family. To make it fun, this could be a day out playing a round of golf.

More baby showers are turning into gender-neutral parties to celebrate both the future mom and dad. Females generally still make up the majority at these parties, but it’s a great way to include the spouses of all of your attendees as well. The main thing is planning to make sure the games and activities provide entertainment for both guys and gals.

For single parents, they’ll still want to feel the support and comfort of their close friends and family. These are similar to the mother or father-only baby showers. However, you may want to figure out a way to encourage attendees to bring an extra gift or diapers for the single parent.

If you have a co-worker that’s having a baby, you can throw a baby shower during or after work hours. These are perfectly fine to invite the guys too since they’re often similar to a work birthday party.

If you have a relationship with someone who will be welcoming their first child into the world soon, why not throw both of you a baby shower? This way, you get to enjoy the fun together as well as share the excitement of celebrating your future children.

Outside of Facebook or other social network parties, there are websites where you can host virtual baby showers online. These allow you to invite friends from around the globe to join in the celebration. Some sites offer free invitations, fun games, videos, music, and much more. All you need to do is create a profile and start inviting people.

How to throw co-ed baby showers

A co-ed baby shower typically includes men and women, although it doesn’t always mean everyone has to play equally. Here are some tips to help ensure a smooth event:

Making baby shower invitations and inviting guests is one of the most exciting parts of throwing a baby shower. But, before you begin making plans, think carefully about whether you really want all these new faces at your home. Remember that this isn’t a traditional “girl” or “boy” baby shower; it’s a gathering of friends and family. So unless you’ve got a very specific reason for wanting only girls or boys present, try to keep the invite list gender-neutral as well.

The best time to organize any kind of baby shower is a couple of months before the big day arrives. That means planning out what food and drinks you’ll serve, setting aside space for gifts, and getting everything ready to go. Make sure you give yourself plenty of time to prepare because once guests show up, you won’t have enough time to clean up afterward.

If you live in an apartment building, choose a location that allows you to easily accommodate large groups. Otherwise, look for a house or condo that offers ample parking spaces and easy access to bathrooms. You may even want to rent out a room at a local hotel, clubhouse, or entertainment venue to host your baby shower.

Decorating your home for a co-ed baby party shouldn’t take too long. Just remember to use colors and decorations that appeal to both genders.

When choosing menu items, make sure you choose something that appeals to everyone. Think about serving finger foods like mini sandwiches, fruit skewers, cheese plates, dips, chips, crackers, cookies, etc.

Get Help Setting Up

If you’re hosting a large group, you might find it helpful to have a friend help coordinate or hire someone to set up tables and chairs, hang decorations, arrange flowers, and provide entertainment. This way, you can focus on enjoying the festivities without worrying about the details.

Don’t forget to enjoy yourselves during the entire process. After all, this will probably be the last time you get together as a group until after the birth of your child. Take advantage of every moment by laughing, dancing, singing, playing games, and just having fun during your baby showers.

Who should I invite to a co-ed baby shower?

The average is about 10 to 20 people that will attend baby showers. Guests are usually family and friends of the mom-to-be, but it can also include other relatives and close female or male friends of the couple.

If you’re still having trouble deciding who to include on your guest list, here are some key people you could invite:

What should I wear to a baby shower?

You don’t need anything fancy for a baby shower. However, you do want to dress appropriately so that you feel comfortable while mingling with the guests.

For a baby shower, casual attire will work best, but women may want to wear a nice, comfortable dress. It doesn’t matter what kind of shoes you wear either since flats, heels, or sandals are all acceptable at these types of events.

For guys to keep up with baby shower etiquette, maybe go with a clean plain t-shirt, polo, or semi-casual dress shirt. No need to wear a tie or suit to these fun gatherings.

What Baby Shower Gifts Should You Bring?

If you’re looking for ideas for baby shower gift baskets, here are some suggestions from our experts:

Diapers – Diaper cakes are perfect for any type of baby shower. This is a layered cake made entirely of lots and lots of diapers the future parents can use.

Other Essentials – This can include baby oils, swaddles, bath soap, baby towels, or anything else the mother or father-to-be may need right away.

What Do Guys Do During a Baby Shower?

Men can do the same activities as women! In fact, it may bring about bigger laughs and more fun than if it were just women at the baby shower.

Imagine asking the dad-to-be to stuff a balloon in their shirt to make it look like he’s got a pregnant belly! Most men will get a kick out of playing along with the same fun and games that the women are doing.

You can also find some games geared towards men online if you don’t think they’ll play along. These can include activities with a beer bottle or a diaper changing competition between the mother and dad-to-be.

While this is a personal choice, but no matter what you decide to do and who to invite, remember it’s all about having a good time and celebrating the life that’s coming into this world. Recognizing the father’s role in their life is also just as important as the mother’s – so why not start with a baby shower that praises both parents-to-be? 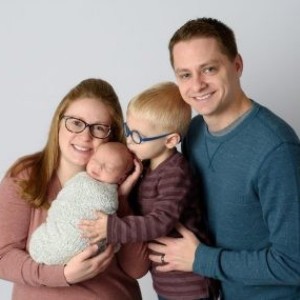 Kara and Ryan enjoy the daily excitement and struggle of raising little ones. With a 3-year-old toddler and an infant, they know the stress and time involved with finding the right baby products. They have spent countless hours researching and testing baby gear over the past 5+ years. Read more about them here.
See Posts

How Many Strollers Do I Need for My Baby? Here’s What Parents Say

How Many Swaddles Do I Need for Baby? Here’s what parents think

Information found on Baby's Journey is not intended to be medical advice or a replacement for the advice provided by a medical professional. Our intent is to share the research we conduct with parents for informational purposes only.

As an Amazon Associate we earn from qualifying purchases.

Send this to a friend